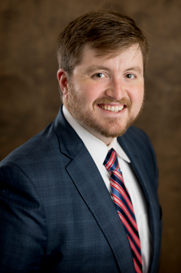 Blake Hoyt is proud to have been born and raised in Arkansas, growing up working on his family’s farms and graduating from historic Central High School in Little Rock. He attended Arkansas State University on scholarship for competitive debate, which saw him win numerous national and international competitions. Blake knew from an early age that he wanted to become a lawyer, so after completing his undergraduate studies he immediately enrolled at the University of Arkansas at Little Rock William H. Bowen School of Law. During law school, Blake earned Top Paper awards in numerous classes and clerked for several Little Rock law firms and state and local government offices.

Prior to joining Sanford Law Firm, Blake gained valuable trial and litigation experience while working at a Little Rock law firm and continued to gain experience in many areas of law while later operating his own law firm in Morrilton.

Blake is a litigator. He handles cases in many areas of law, including employment, wage and hour, contract, personal injury, and DWI/DUI criminal defense.

While not at the office, Blake enjoys spending time with his wife, Emily, working on the farm, and spending as much time as possible hunting and fishing.